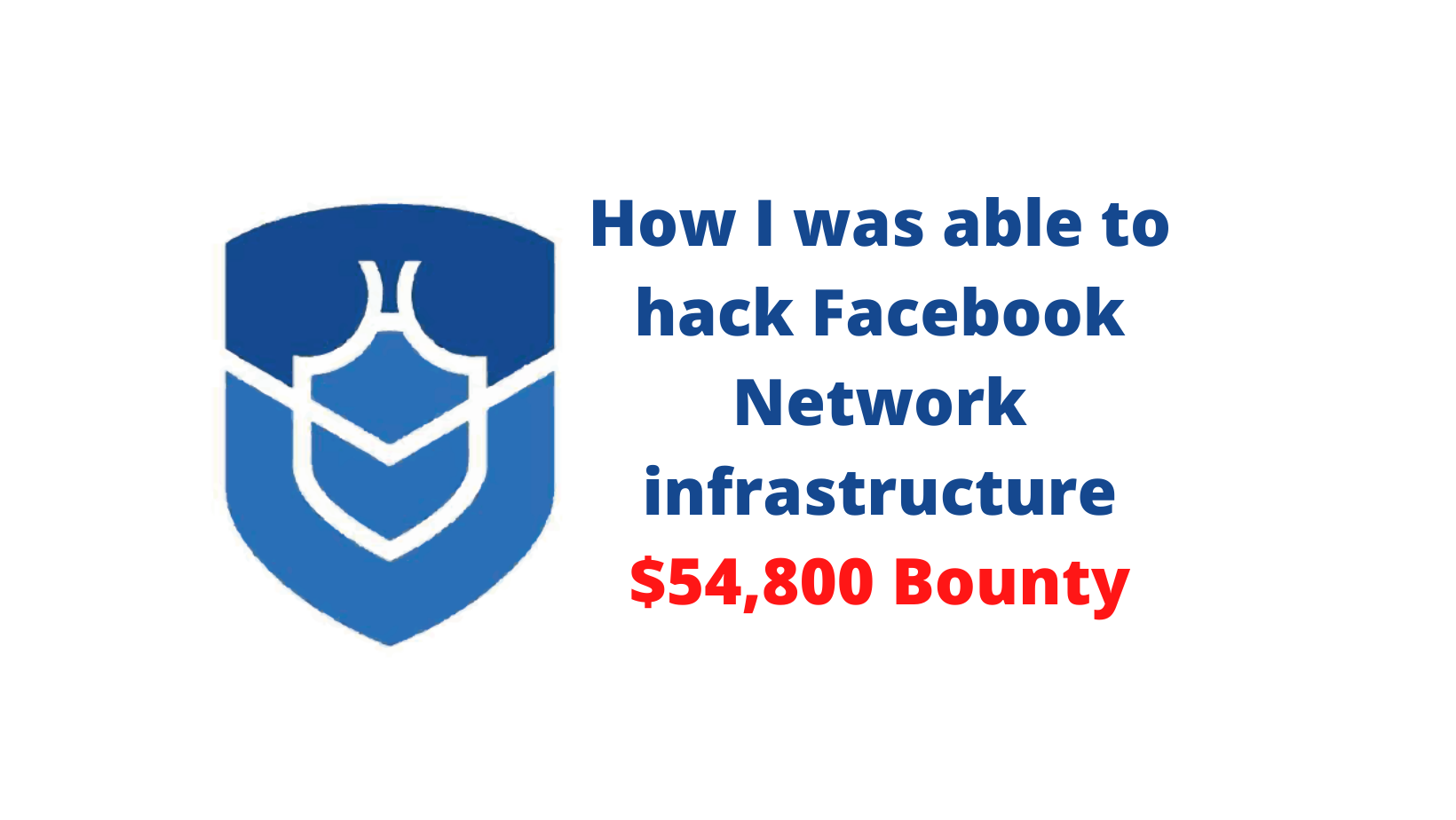 I highly recommend reading part one to understand the storyline.

In part one I have found Account takeover by an unsecured API which allowed me to change the password of any admin account with no user interaction, and I got rewarded 7500$ by the Facebook security team, In part two I have found account takeover using cookies manipulation and chained it with Internal SSRF I got rewarded a bounty of $xxxxx Yes 5 figures number .. let’s start.

This article was previously revised by multiple parties before releasing it, and I had to get written permission to release it as well so that some names and information might be changed as a request from Facebook and its partners.

So when I found the first vulnerability in part one Facebook mitigated it after a day of reporting it.. then I had to get back to read the burp suite history and just to see how things worked.

As you can observe in the screenshot, Number 1 in blue, the cookies its ASPXAUTH, Absolutely yes!.

Have you got what I imply? — ASPXAUTH indicates 80% it’s vulnerable but first, you need several things:

You can read more about that here: MachineKey Class

well, I don’t have these 4 things, so how did I assume it’s vulnerable? — Okay. Actually, I didn’t but most of the application that uses the ASPXAUTH they use only email or user in the encrypted cookies with the encryption keys, and expiration time. I exploited it in other bounty programs websites using the same method many times before, and it worked.

So here I have to find a way to go around this, and I believe there’s nothing to lose by trying, after that, I proceeded to google and searched for other websites that utilized the same application – I assumed here that I will be lucky and find a website that utilizes the same application and same encryption keys and I just have to use the correct admin username.

I did that and I found another website using the same application and the registration is active and I registered using a username that is used by the Facebook admin, I intercepted the request and took the ASPXAUTH and replaced it with the Facebook expired ASPXAUTH, and guess what? 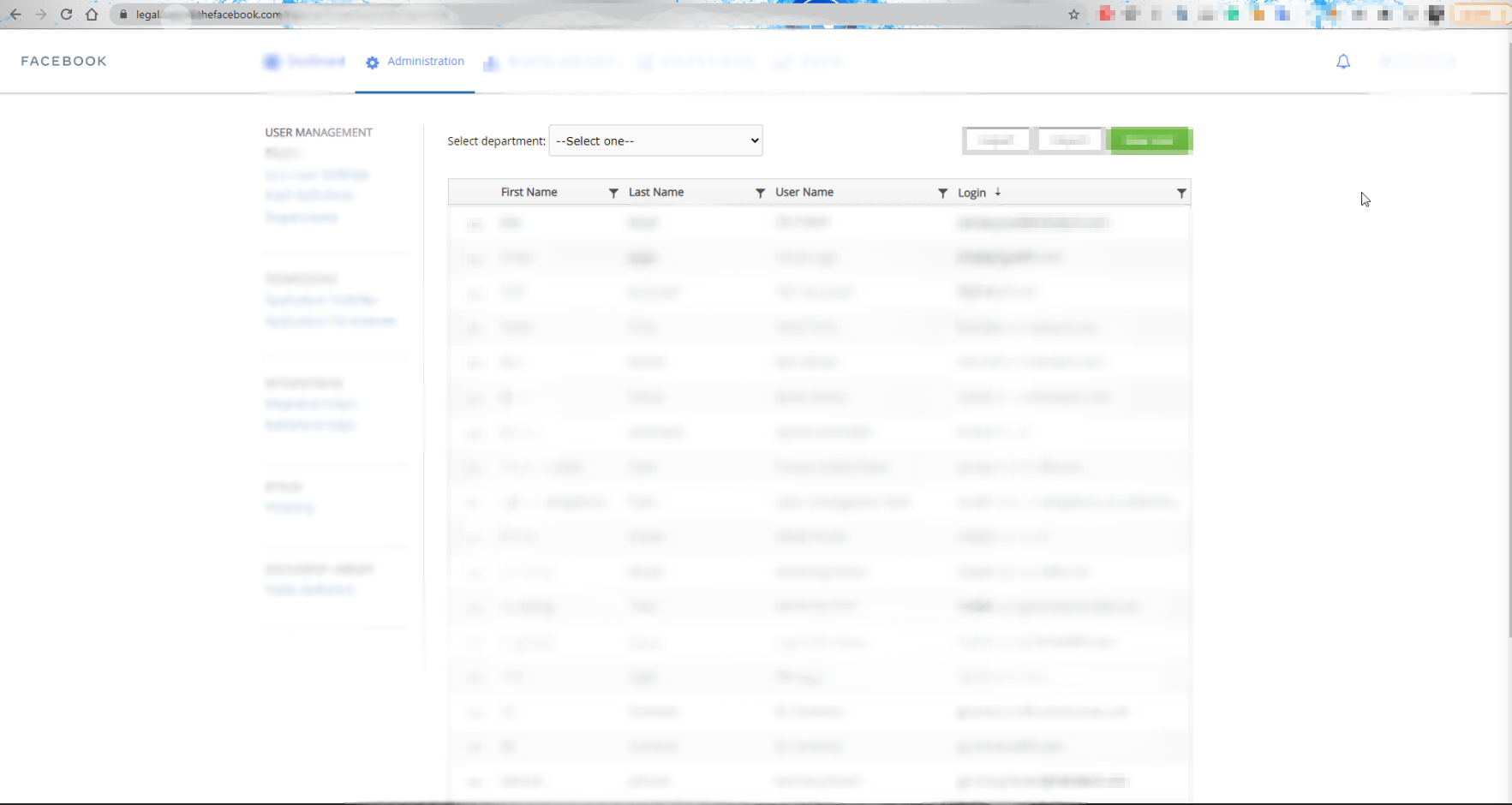 I missed this Panel for a while 🙂 .. but yeah! I’m back into it again, now let’s have a little talk about ASP.net mistake that most developers must be careful while building their applications to secure it according to these several points::

So I just noticed something in the panel which’s the option of making forms, and there was another option which’s API trigger. So, I suspected something, mostly there’s an SSRF here with no limits at all, according to that I wrote a message to the Facebook Security Team explaining to them my suspicion there’s almost certain critical SSRF in the application, and if I can get permission to test it, and they answered me :

at this point, I was still in contact with them in the report of the first part (The account takeover), because these vulnerabilities were reported a week after the first one. As you can see Facebook Security Team still thinks that I’m claiming that I have another auth bypass and SSRF even after I explained the vulnerabilities to them with proofs. According to that, it means they gave me the green light to test the SSRF.

After a while, I wrote a small script and uploaded it to their editor, the script allowed me to send any request I want with any data (GET, POST, PUT, PATCH, HEAD, OPTIONS) to any URL – internal or/and external.

From the script backend, I was able to change the request method and the sent data, etc

And I tried to hit the Facebook canary script :), again guess what?

I got my lucky Canary token, Now what’s next? — I have to make a new report with the full details including the scripts and PoC as they mentioned before.

Conclusion 2: By writing a script to send custom-crafted requests I was able to gain an Internal SSRF and gain access to the Facebook internal network, The complexity here I consider it low and the Impact is Critical.

The Full Impact of this SSRF :

A successful SSRF attack can often result in unauthorized actions or access to data within the Facebook internal network, either in the vulnerable application itself or on other back-end systems that the application can communicate with. In some situations, the SSRF vulnerability might allow an attacker to perform arbitrary command execution.

An SSRF exploit that causes connections to external third-party systems might result in malicious onward attacks that appear to originate from the organization hosting the vulnerable application, leading to potential legal liabilities and reputational damage.

.For more info about SSRF vulnerabilities check this article from portswigger.

Final Conclusion: I chained both vulnerabilities to get to one point which’s accessing the Facebook internal network (SSRF), By using the Account takeover to reach into my uploaded script inside the application which will send custom-crafted requests as I want.

Let’s talk about what I’m able to achieve by using the chain of vulnerabilities I found until now:

After a long time of waiting, I just got this message from Facebook : 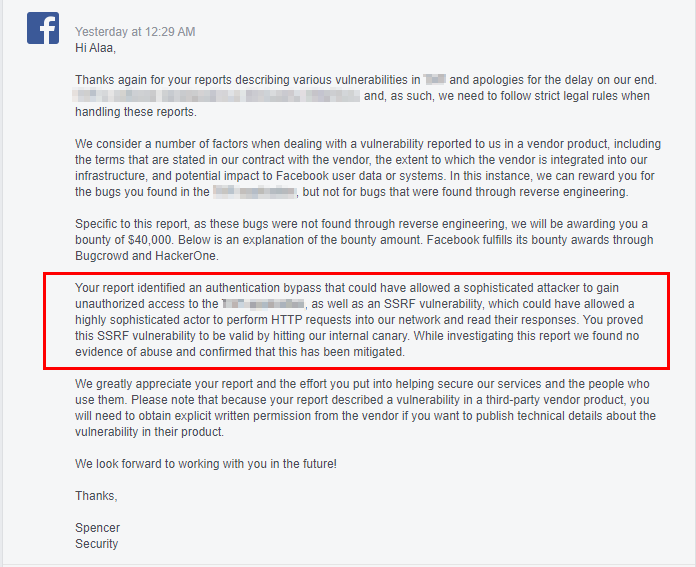 The total with the first vulnerability is $54,800

I would like to give a Golden tip for the bug hunters, Always when you see ASPXAUTH try to get the cookies from another website that using the same application and test the same method that I did:

I enjoyed this but waiting 6 months and closing reports for irrational reasons I’m very grateful but all this hard-working, and this is not the only SSRF I found, actually, I found more interesting ones but Facebook closed them as informative because Facebook signed an agreement with the vendor which it was signed weeks after the reports got Triaged which this is not my problem actually, so anyways I just won’t call it the best experience.

This is the final part and I’m sorry if anything is not clear and for the delay in providing part two, as mentioned before, I waited some time for written permission, and the report got revised, so a lot of things got removed or blurred to keep the privacy of the other parties.